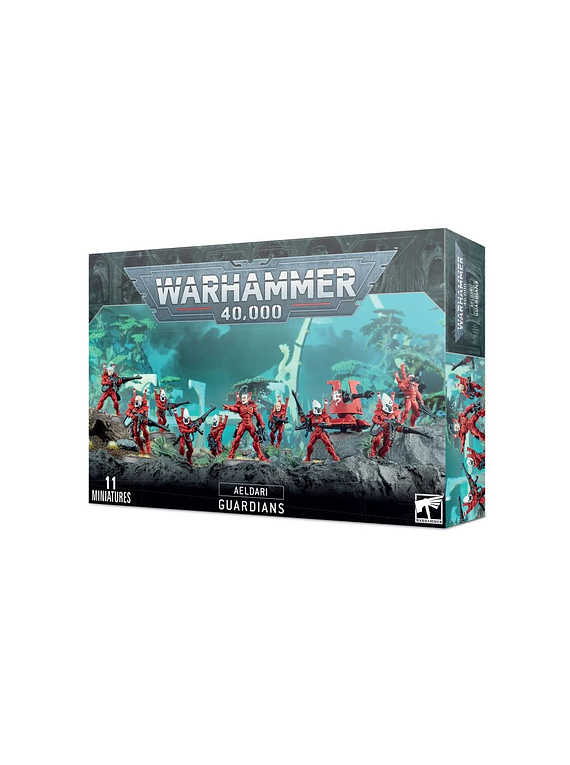 So few in number are the Asuryani that every citizen must train for war, in case they should one day need to defend their craftworld. In times of peace these Aeldari pursue artistic and civic Paths, but when called upon, they don their war masks and take to the battlefield.

This kit builds 10 Storm Guardians, accompanied by a Serpent's Scale Platform. Storm Guardians are skilled close combat troops, suited to claiming objectives with deadly blades and shuriken pistols, protected from enemy fire by the powerful forcefield of their floating Serpent's Scale Platform. Other Storm Guardians bring special weapons to bear, burning foes out of cover with bursts from their flamers or melting through armoured bunkers with their fusion guns. This kit comes with a variety of Aeldari close combat weapons, flamers, and fusion guns, as well as 11 unhelmeted heads. You can also choose to build this kit as Guardian Defenders.

This set comprises 152 plastic components and is supplied with 10x Citadel 28.5mm Round Bases, 1x Citadel 40mmm Round base, and 1x Aeldari Transfer Sheet. These miniatures are supplied unpainted and require assembly – we recommend using Citadel Plastic Glue and Citadel paints.

The Shopping Cart is empty